The 2017 RORC Caribbean 600 started in magnificent conditions with the largest ever offshore fleet assembled in the Caribbean enjoying sparkling conditions. Close to 900 sailors from 30 different nations competed in the 9th edition of the Royal Ocean Racing Club’s classic offshore race. Olympic medallists, America’s Cup winners and round the world sailors competed alongside passionate corinthians on the same 600 mile race course around 11 Caribbean islands, starting and finishing in Antigua. The 2017 edition will be remembered for highly competitive racing throughout the fleet, with American yachts winning the major prizes. The race was affected by unusual weather conditions, with a low pressure system sending the wind direction spinning through 360º of the compass. 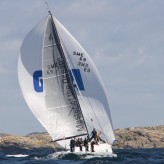